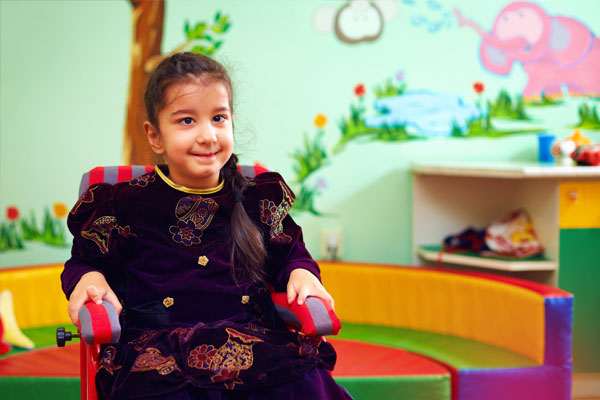 What is Cerebral Palsy?

Cerebral Palsy affects about one in every 400 children. It is a brain injury acquired just before, at, or soon after birth. The immature brain is damaged due to lack of oxygen, trauma, infection or less commonly a genetic condition.

The risk of Cerebral Palsy in multiple births is considerably raised, as it is by premature delivery. Advances in medical interventions mean that we are seeing more children surviving traumatic birth but left with a physical disability. And more of these children are being included in mainstream settings. Cerebral Palsy causes a persistent disorder of movement and muscle control. Children with Cerebral Palsy have physical and mobility difficulties of varying degrees. Some pupils will have severe physical difficulties affecting all parts of their body, while others will have mild difficulties on one side.

What are the Implications of a Diagnosis of Cerebral Palsy?

There are many different medical terms to describe the nature of the physical disability depending on the extent and form of the impairment. A child affected on one side of their body will be described as having Hemiplegia. Diplegia suggests that the lower limbs are affected more than the upper or vice versa, and quadriplegia is when all four limbs are affected.  Ataxic, dyskinetic and spastic describe the type of muscle impairment. Ask the family to explain the medical terms used in health reports  – they will be the experts in what it means in practical terms for their child.

It is important to find out the precise nature of any particular child’s needs. Most young people with Cerebral Palsy will have support from Health professionals who may include a Paediatrician, Physiotherapist, Occupational Therapist and/or Speech Therapist. These professionals will be keen to work in partnership with you.

Cerebral Palsy is a lifelong condition for which there is no ‘cure’ but it is not degenerative. Growth and age may make some symptoms appear more pronounced. Without good management of posture, Cerebral Palsy can result in deformity as the child grows. It is vital therefore to work as part of a multi-disciplinary team to help the child achieve maximum independence, and remain as physically healthy as possible.

Children and young people with cerebral palsy present in many different ways, however some symptoms are very common. The effort involved in controlling muscles causes fatigue and pupils may be exhausted by the afternoon. Auditory discrimination may be affected, making background noise in the classroom very distracting. Many children with Cerebral Palsy are easily startled by loud and sudden noises, and emotional outbursts can be common.

Whether you are a school looking for psychology support, or a parent seeking support for your child, get in touch. Our friendly staff are here to answer any initial questions you may have.

Get in touch to find out more
We use cookies to ensure that we give you the best experience on our website. If you continue to use this site we will assume that you are happy with it.OkPrivacy policy