One of my favourite theories in psychology is Maslow’s Hierarchy of Needs. In this theory, Maslow explains that certain aspects of life should be satisfactorily met before the next level of need can be fully met. Basically, you need your physiological needs met before your safety needs, then you can move towards belongingness, self esteem and finally self actualisation. 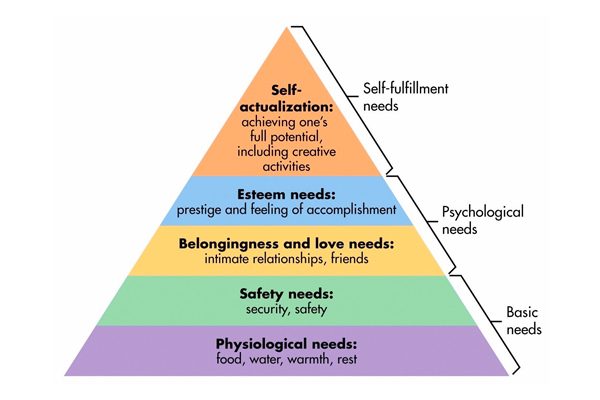 This theory popped into my mind this week when boy number two said the same thing to me on two different occasions. The first time we were watching a CBeebies programme that had some child actors who have disabilities. Boy number one recognised this and asked me if it was a programme about disability or whether it was just like real life and there were people with disabilities on there. Boy number two said- ‘yes just like me’. I asked him what he meant and he said that he has a disability too. I am not sure why I was surprised by this (I shouldn’t have been as he is a very empathetic boy much of the time), but I was. It made me sit back and think about the fact that he is identifying himself as having a disability. This is not something that we have made a conscious effort to reinforce or tell him really. Although he does know that he does some things differently to his brothers and other children and that he has medication and equipment that they don’t have.

These occasions reminded me of Mr Maslow and his theory. In order for boy number two to gain esteem, he needs to have a sense of belonging. He does belong to our family, his school, his friends and the clubs he goes to, but this is another aspect for him. He has found part of his identity and is recognising and being excited by this.

He has identified himself as belonging to a community and he is seeing representations of this in a really positive light. With his sense of belonging and identity increasing with understanding and recognising that he has a disability, I think he is a good way on the road to celebrating this and using his positive mindset to be a successful human being. It is my best hope that as a society we can celebrate difference and not discriminate, but I know this will be an ongoing battle.

Helping all of our children to find their identity (hopefully this will not be a singular thing as I have spoken about previously), for them to be happy with that and to celebrate it, whatever it is, will always be something we ultimately want for them all.